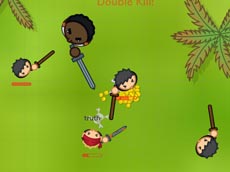 Pixel Warfare - a game that has become an integral part of PacoGames. And now, we have here fourth sequel of this revolutionary multiplayer shooter from Minecraft environment. Fourth part of Pixel Warfare has everything, what you have been used to from the previous parts, plus contains a few new features. A lot of things have been improved and we believe that the game will attract both type of players, those who have some previous experience with Pixel Warfare games, and those who did not play any game from Pixel Warfare saga. Graphics and map design were slightly modified, you can now choose from up to four graphics settings. We also changed game menu and user interface, which now looks much more stylish. We hope you enjoy the game at least as much as the previous parts. Have fun.