A collection of the best free online barbie games.

This is the best collection of barbie games! Dress up and makeover your doll, help her with makeup, fashion her hair, cook with her and have fun with your princess. You can even try life of a barbie doll. You can play all those games and even more here. Read more.

The Celebrity Way of Life

Barbie and Elsa in Candyland

Barbie Wants To Be A Princess

Barbie and Elsa: Who Wore It Better

Barbie and Ken: A Second Chance

Barbie and Ken: A Perfect Christmas

Barbie Joins Ever After High

Barbie Get Ready With Me 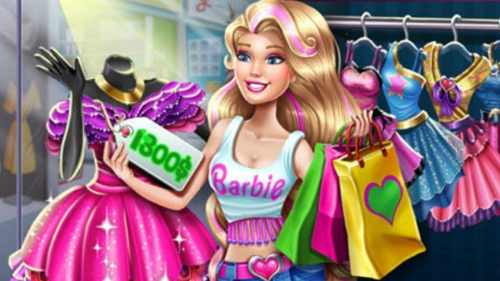 Barbie is much more than just a toy! She takes part in many fun activities which you can try out too. Make-up challenge, dress-up challenge, but also a cooking challenge! Who would say that she can even cook, right? But she can, she has already made many delicious meals and you can learn to prepare them with her, especially world-famous Barbies birthday cake. Choose a wedding outfit for her and Ken will be the happiest man ever. Barbie and Ken love date, the perfect picture of two people that love each other. Let Barbie take you on unforgettable adventure. What about her house? She wants to prepare a legendary party for her friends, but her house is one big mess. Help Barbie clean place where the party will take place, and make sure that everything is ready to the utmost detail before the first quest rings the doorbell.

Ready for more action? Then form special Barbie agent team which will reveal top secret information right from the most dangerous villains in the city. Attend yoga classes with other girls, and keep your bodies in shape. Or should we say that this is just another infiltration mission of our special agents? Who knows. You may discover more secrets, if you come to the annual summer fashion contest. Many influential people will attend this event where the most beautiful princess will be crowned as total winner of all beauty contests together. Help Barbie with preparations for this contest, give her your professional advices about her haircut, and new trendy possibilities that could make a real twist to her already fascinating look. Her face! It needs some changes in makeup application. Create wonderful eyelashes with latest mascaras, adjust eyebrows a little bit, and don't forget lips - these need special attention. This red lipstick will surely be a great choice! Choosing right clothes is always a brain-teaser. Combine particular pieces together, and try to create the most stunning outfit ever. Also, don't overlook accessories. Proper choice of rings and amulet can sometimes decide results of such competition, no matter how beautiful in general a girl is. Barbie and her endless possibilities of entertainment have just arrived!

Barbie's days and her daily activities look like a perfect life. Together with Ken, they are exemplary family showing what it should look like in an ideal world. Thanks to no violence and simple explanation of in-game activities, together with friendly game controls, Barbie games are truly ideal games for kids. By playing these games, kids are part of Barbie's and Ken's awesome life and days within which they do and discover all ordinary daily activities which they will need sooner or later in their life.

Ever famous thing, whether it is a human, product or a service is usually an interesting story behind. No difference in the case of Barbie.

Although Barbie does not look at that, Barbie is over 60 years old. Let's go back in time to March 9, 1959, when Barbie was born, and even to days before that. Barbie was not first of its kind. Ruth Handler, the creator of Barbie and wife of a co-founder of the Mattel toy company, found need of a doll like a Barbie by watching her daughter Barbara playing with a paper dolls, giving them adult roles. Her daughter wanted to a doll acts like an adult, however all dolls in the market were representations of infants which. A space in the market was found and Ruth started looking out for an ideal character for a new doll which would be sold by Marvel Toy company in next decades by billions. The true inspiration for Barbie was found in a german doll called Bild Lilli (first sold in 1955, 4 years before Barbie), which were being sold initially to adults, but became popular among children. Ruth found this doll during her trip to Europe in 1956, immediately recognised that it's exactly what she is looking for, bought 3 of them and took them back to he USA, where Ruth Redesigned this doll and named it after her daughter Barbara. Barbie was born! If you are interested for more details, full story of Barbie is available on Wikipedia.

According to Barbie page on Wikipedia, Barbie had a significant social impact by conveying characteristics of female independence, and with her multitude of accessories, an idealized upscale life-style that can be shared with affluent friends. Starting 1987, Barbie is not just a doll, but also a media franchise, including animated films, television specials, video games, and music.

Barbie games belong between the most sought after games for girls with monthly searching on Google between 1 and 10 millions. This interest resulted in attempts of Mattel and many other independent game developers to make an own game either directly with Barbie or at least Barbie-style game. There have been created thousands of online Barbie games in last decades, however, many of them stopped be playable with technology obsolescence. Barbie games listed here on PacoGames are created with modern native technologies and respect basics of moral education to be suitable for kids of all ages.